where it all began: the very First NH Adult Gymnastics Camp

the First NH Adult Gymnastics Camp took place in the summer of 2015! this camp was henceforth known as "the original adult gymnastics camp."

Want to know when the very first NH Adult Gymnastics Camp happened? The historic date was July 17-19. On that weekend, the first ever all-adult gymnastics training camp took place in Portsmouth, NH at Atlantic Gymnastics. The camp was born out of the idea that it would nice for adult gymnasts to have a judgement free zone to learn drills and technique while also having the opportunity to socialize outside of the gym. Plus, it's a great excuse to take a trip to Seacoast NH in the summer! 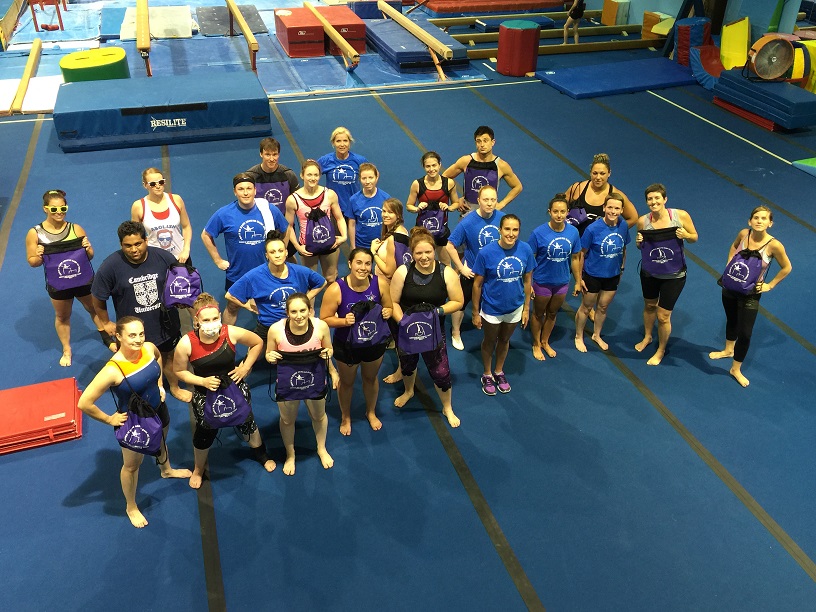 We had the entire gym to ourselves!!

the idea for an adult gymnastics camp was born

As a competitive adult gymnast, I had always thought about how fun it would be to go to an adult gymnastics camp, but I wasn’t aware of an all-adult camp, and I had heard of adult ‘weeks’ at some camps, but a week was a bit much for me. So upon the encouragement of some members of our adult gymnastics facebook group Just Like Fine Wine...Adult Gymnastics! I decided to start my own!

Check out when our next camp is happening here.

Our slogan was "Proud to Hang Around Bars All Night." Which didn't exactly happen--because most of the athletes turned in early to keep up with the rigorous schedule of the training camp. There was 14 hours of gymnastics planned over a 48 hour period, and the athletes ranged in age from 23 to 61! Camp began on a Friday night and ended Sunday night.

The camp attracted gymnasts from the east coast of the US, the west coast, and everything in between, in addition to a couple of athletes from Canada and the UK. There were about 30 women and 10 men in attendance, although the focus of the camp was on the women's artistic events. Limited men's equipment was available, and there was plenty of time to play anywhere in the gym in addition to structured time. 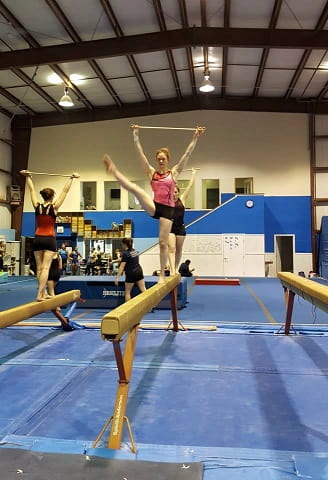 All events began with a group warm-up. Athletes are split into groups by skill level.

Camp was able to accommodate the needs of the beginner gymnast all the way up through USAG/AAU/NAIGC competitive level 9. We listened to a variety of 90s music (a huge request!) but also some contemporary stuff to keep energy level high. Everyone was super-friendly and helpful to one another. Instant friendships were made at camp. Many gymnasts had a roommate (or 3!) which was fun. The hotel and restaurants were within walking distance from the gym, and there were also some folks with extra room in their cars to give anyone a ride that needed one. Many athletes flew into Logan and took a bus up to Portsmouth.

Friday night after warm-ups we split into groups (the athletes were divided by level into 3 separate groups). These groups were called "Stone Age," "Paleolithic Age" and "Ice Age." Each group had a couple of men. Everyone was full of excitement and eager to get on the equipment.

Friday night we focused on physical preparation for warm-up purposes, floor basics, bar basics, and beam. We met for a quick dinner at Chipotle’s and a few ambitious campers hit up downtown Portsmouth for a beer. 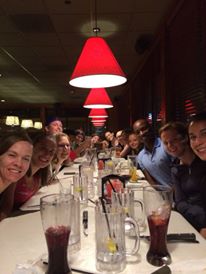 The option to dine out together was super fun and led to lifelong friendships!

Saturday included two training sessions. In addition to the four women's artistic events, we offered a dance warmup, a men's event warmup, and individual and group sessions with Dave Burchuk from Lighthouse Physical Therapy. There was an option for choreography critique as well. Sandwiched between the two trainings we had Mental Training and Nutrition for Gymnastics clinics by the pool. Clinic was great because discussion ensued which meant that the campers learned from one another as well. Everyone enjoyed a dinner out together Saturday night, and some even snuck in a trip for ice cream. Since New England is known for its lobster, people started putting a lot of effort into posing as a lobster for pictures. That sure generated some laughs!

Sunday started bright and early--8am. There was a rush at Starbucks that morning for sure! We had a morning training and then an afternoon training. Morning training included a conditioning option, which many of the adults were interested in. This impressed me since people were getting pretty sore by now! The presence of a TV camera filming for the NH Chronicle perked everyone up for the afternoon training. We also had an optional show in the afternoon where the groups presented what they had worked on at camp. Many new skills were learned, old skills were revisited, and current skills were polished. Campers also left with plenty of drills they can work on at home.

We presented 12 awards, including an award for: 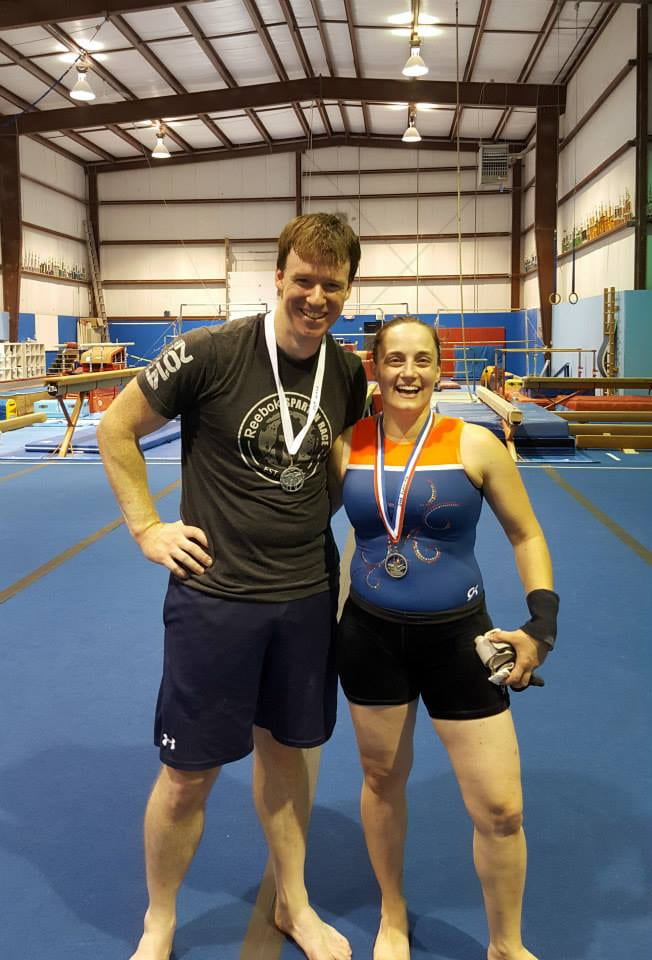 Eric and Abby with their awards!

Best Dancer — for her spontaneous outburst of dancing to "Save a Horse, Ride a Cowboy" — Traci from PA 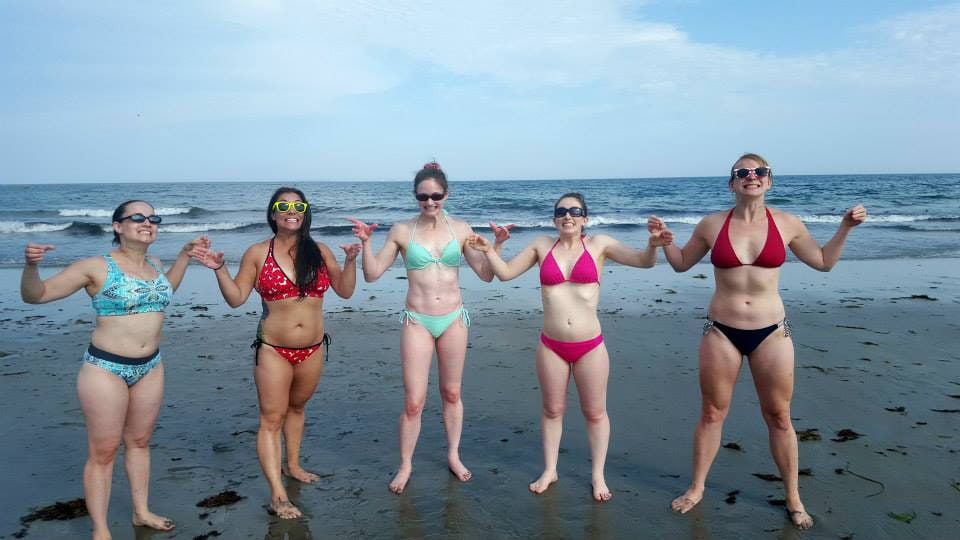 This group came up from Cambridge MA where they train together to enjoy camp!

After awards we hit up Wallis Sands Beach in Rye (cue the handstand pictures and more lobster imitations), and ended camp with a lovely seafood dinner up in Kittery.

A hearty Congratulations to all the friendly, hardworking athletes who came to our first camp. The athletes did a tremendous job pacing themselves and also listening and incorporating the corrections, tips and drills given by the staff. We used a white board to list the skills that were learned or improved at camp and it was an amazing accomplishment for this seasoned group of adult gymnasts. Camp was abuzz with discussions about 'next year...' which means that this camp will have to be an annual event! I'm also toying with the idea of a winter camp (editorial note - we have had many summer AND winter camps since!)

The Adult Gymnastics Staff for 2015:

Our Mentor and Inspiration for camp:

Join our facebook group Just Like Fine Wine...Adult Gymnastics! for updates on future camps, or fill out the form below to be added to our adult gymnastics mailing list! You can also visit this page to see when our next camp happens.

Disclaimer: Adult gymnasts and coaches give advice and suggestions on this page. By reading and implementing the information, you assume all liability for injury. The advice given is for educational purposes only. Please check with your in-person coach and ensure that you have the proper pit, mats and/or spot available before trying any suggestions. If you don't agree to these terms, do not attempt anything that you see on this page.

Have your say about what you just read! Leave me a comment in the box below.